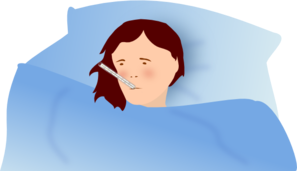 I'm at home with a cold.  It's actually been developing for almost two weeks.  Last week we only had two days of school.  Since the cold was just at the "annoying" level, I went ahead and subbed those two days.  However, over the Thanksgiving break it got worse instead of better.  I almost called the doctor on Friday and Saturday mornings, but decided maybe all I needed was some rest.

Then Saturday night came and I started coughing.  Uncontrollably.  You know the type of cough where you get stuck in an exhale and can't get even a tiny inhale? Yeah, that type of cough.  I don't mind so much the coughing fits where you're able to inhale between coughs.  Those are annoying.  However the coughs where you're stuck in that cough and can't inhale - those are scary!  I was starting to regret not calling the doctor that morning.

Then Sunday night hit, and the cold hit my ears.  Yes, we were now in the dizzy and nauseous stage.  Of course I was still being stubborn and wondering if I could work the next day.  After a night full of coughing fits, I relented and told hubby that I would call the doctor in the morning.  Thankfully I didn't get a call to sub even though I promised him that I'd turn it down.  I called the doctor about 10 minutes after they opened.  Next available sick appointment?  4:50 p.m.  I made some sort of comment how they've been busy.  The receptionist replied that they had been swamped with calls.

A few times during the day I felt pretty good.  I even thought about calling back and cancelling my appointment.  Of course that would be about the time another coughing fit would start up again.  At lunch, hubby made me promise not to cancel.  That afternoon I took my temperature and had a fever (100.2).  Ok, I'll go.

Of course I already knew the doctor would say I have a sinus infection.  Bending over to pick up a toy on the floor told me that.  (OUCH!)  He gave me a prescription for an antibiotic and some yummy cough syrup. Seriously, this cough syrup *is* yummy! I think it tastes like cotton candy.  Hubby says it tastes more like burnt marshmallows.  Either way, I like it and don't have to build up the courage to take it like I do for that icky cherry stuff.

So last night I took the antibiotic.  Unfortunately I forgot to take another dose of cough syrup before bed and spent half the night coughing.  Yes, I will admit here for everyone to read that I was too lazy to get up out of my warm toasty bed and walk two rooms over to take another dose.

I decided last night to take today off from subbing to give the meds time to kick in before facing a classroom of children.  I sent a text message to our awesome substitute coordinator.  She replied saying it was a good idea and hoping I was better soon.

So yesterday and today are days of rest.  Pretty rare for a mama of five.  How has this cold affected my diabetes?  Well on Saturday my fasting glucose was 110 when I'm typically in the 120s or 130s.  Not bad!  I'm making sure to eat, but trying not to get into unnecessary snacking.  I admit I haven't checked my numbers like I should, but I'm working on taking care of myself.  It's hard to sit still, even when I'm sick.


Image credit: Found here.
Posted by Sue Rericha at 10:15 AM

Email ThisBlogThis!Share to TwitterShare to FacebookShare to Pinterest
Labels: Illness