One of the resources I was introduced to during MasterLab was the database created by Symplur. They have created what they call the Healthcare Hashtag Project. You can search for Twitter hashtags based on tweet chats, conferences, various diseases, etc. What a wealth of information! I can't even begin to explain this resource, but if you head over to their site and play around a bit, I'll bet you'll be amazed like I was (and still am!).

Now to put some names (or Twitter usernames) to the faces. The first column are the top ten people mentioned with the hashtag MasterLab while the second column contains the top ten people tweeting about MasterLab, using the hashtag. It was lovingly brought to my attention that I tweet a lot. For those of you not on Twitter, yes, I am @rfamsramblings. You can tell that I am passionate about MasterLab! (Screen shot taken on July 11, 2015.) 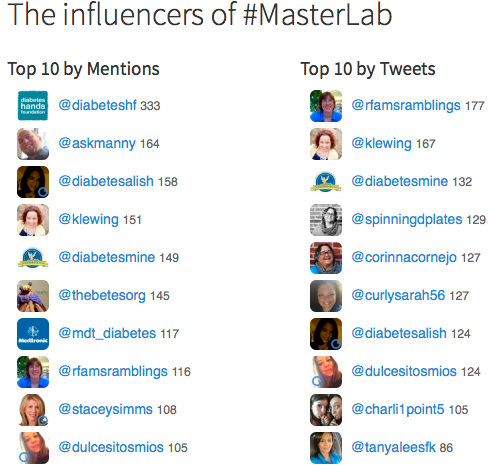 Some of these people were attending MasterLab while others were following along from home. Some represent businesses or non-profits, while many are individuals who live with diabetes as part of their daily lives. (I'll admit that I know that there's at least one "bot" in the first screen shot above which automatically retweets sporadic posts.)

Regardless our role in the diabetes community, we share a common goal: access for all until a cure is found!
Posted by Sue Rericha at 11:01 AM