Who do you lean on?

We all need someone to lean on.  As a mom, I feel that I'm always being leaned on.  Rarely to I allow myself to lean on others.  Yes, that's one of my major flaws, trying to support others but not asking for help when I need it.  However, there are times when someone comes along and gives your a boost when you least expect it. 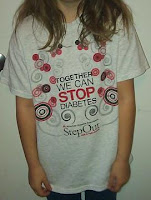 I've mentioned a few times my eight year old daughter (fourth of my five) who asked (practically begged) me to allow her to raise money for the ADA's walk this fall.  She knew we wouldn't be able to physically go to the walk, but she knew I was signed up as a virtual walker and she wanted to sign up, too.

As of right now, she has raised almost $200!  Not bad for an eight year old (who will be nine next week, she reminds me often).  Yesterday our t-shirts and my Red Strider hat came from the walk.  She was so excited that she begged me to wash it last night so she could wear it today.  Of course I washed mine too, so this afternoon we'll match.

It is impressive that an eight year old would feel strongly enough about a cause to get involved.  It's even more impressive when they don't do it for themselves, but for another.  She is one that I can lean on.  I love you, sweetie!!!
Posted by Sue Rericha at 12:35 PM

Email ThisBlogThis!Share to TwitterShare to FacebookShare to Pinterest
Labels: ADA, Family, Step Out