Saying good-bye to a long-time friend and companion 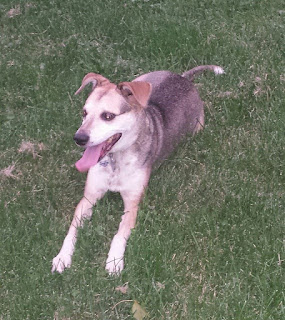 Yesterday (yes, on Christmas) we had to say good-bye to our 13 year old dog, Sadie. Most of the kids remember when we adopted her from the shelter the Monday after returning form a family vacation. She was about six weeks old. It was six weeks after we had lost our first dog (Angel, 11) to bone cancer.

Sadie had been having seizures recently so we put her on medication. Overall she was doing well on meds with only an occasional minor shake that most people would probably not notice. In the back of our minds, we knew it was probably not a seizure disorder. Those usually don't show up in a 13 year old dog. Thankfully we have a wonderful veterinarian who remained hopeful but is also honest with us. He had the same concern.

In the middle of the night this past Tuesday morning, she had her biggest seizure yet. It lasted almost 45 minutes. Her previous ones never lasted that long. Previously, when the seizure stopped she would get up after a few minutes, though she would appear intoxicated until she recovered. This time she didn't get up. Later in the morning she would have two more seizures that lasted about 10-15 minutes each. She was still on the floor and hadn't taken her morning medication, so I took her to the vet.

They took awesome care of her there, but with at least one more seizure, vomiting and diarrhea, barely able to lift her head, kidneys shutting down, and difficulty breathing we realized it was time to say good-bye. Although we were hoping to wait until the day after Christmas, we knew that would be a selfish decision. Our last gift to her was to say good-bye and let her go.

What does that have to do with diabetes? Nothing. My life doesn't revolve around diabetes, but it does revolve around love - even for the pets in my care.
Posted by Sue Rericha at 4:12 PM

Email ThisBlogThis!Share to TwitterShare to FacebookShare to Pinterest
Labels: Pets