I was at home, pregnant with my fourth child, playing on the computer.  A friend of mine sent me a message online and said something about a plane crash on TV.  I brushed it off, saying that I didn't want to know about the crash.  I was eight months pregnant and commercials made me teary.  Why would I want to watch a story about a plane crash? 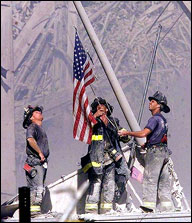 Obviously she didn't tell me the significance of where the planes crashed, otherwise I probably would have turned on the tv.  However being an emotional (and hormonal) pregnant woman, I chose to be ignorant for at least a little while.

Then my husband came home for lunch... Of course he knew what was going on.  He immediately turned on the television.  It took less than 30 seconds for me to turn into a blubbering mess.  I didn't know who did this.  The first plane could have been an accident, but two planes made it obvious that it was not.  Who would do this?  Why would anyone do this?  Oh, please God, please let everyone get out safely.  I knew the answer to that was something I didn't want to hear.

Ten years later, as everyone shares their memories, I think of what my parents felt at the time of JFK's assassination.  Everyone alive at that time can tell you exactly what they were doing, where they were, who they were with when they found out that the President was shot.

My prayers go out to the victims, their family and friends, our country, and the people of this planet. I am thankful for an interfaith service that I was able to attend today where many religions and denominations were represented.  May we find peace in our world through understanding!
Posted by Sue Rericha at 5:39 PM