Today's WEGO prompt: Write about a memory you have but describe it using the third person. Use as many sensory images (sights, sounds, textures, etc) as you can. Don’t use “I” or “me” unless you include dialogue. 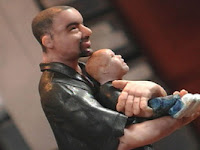 The little girl sat on her father's lap. She was probably about seven or eight years old. Smiling at her father, she decided to play a game she called "clay man". Distorting her father's face and moving his arms, she would burst out laughing at the goofy expressions he could present. Every once in a while, he would make a scary growl to accompany his new look. This caused the little girl to scream and then fall into fits of laughter. Sometimes her younger sister would join the game and together they would move the clay man into funny poses.

All too soon the little girl grew out of such childish games, until... Several years later, that little girl became a mother. She taught her own children the game of "clay man."