Advent Through the Eyes of a Child

This Sunday was the third Sunday of Advent. My fourth child was asked to carry down the advent candle. She declined politely to the head usher. However my youngest almost was on the verge of jumping up and down as she raised her hand with a huge smile. "Do you want to carry the candle?" I asked, already knowing the answer. "Yes!"

This year we are using previously lit pillar candles with battery-operated tea light inserts, so safety wasn't a concern. At the designated time, I walked her to the back of the sanctuary. Being only seven years old and needing to walk down the aisle, I expected some of her shyness to come out and delay the service. I walked with her most of the way, allowing her to finish the walk up to the lector, who was standing by the wreath, on her own. 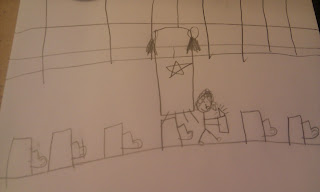 She was very proud of herself which became more obvious in what she drew as we sat in the pews. My young artist drew a picture of herself walking down the aisle holding the candle, complete with banner, balcony, and pews.

Of course this proud mom discretely snapped a picture of her drawing, not knowing that this child had not yet completed her artwork. As we continued to listen to the gifts of music and the stories told during Advent, my child added color to her story - the brown woodwork, the blue candle with its flames of orange and red, her blonde curly hair, and the colorful stain glass. 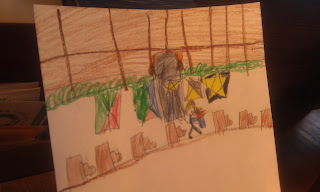 The pride she had in carrying the candle and participating in worship came through in her artwork. Of course we had to show the pastor as well as the usher who allowed her to have such and honor. Now we show the world. As the song goes, "This little light of mine. I'm going to let it shine." And shine it does!
Posted by Sue Rericha at 7:23 PM