My Keurig arrived tonight. My new Keurig B70 Platinum. *swoon* Rather than go on and on, let the pictures tell the story (with a few words here and there).... 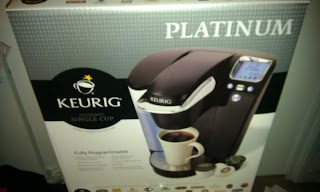 Right out of the shipping box, waiting to be opened. 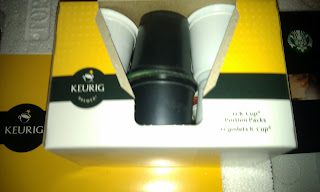 Sampler that came with the Keurig. I received 11 coffees and 1 tea. At least I have some coffee for guests now! I had already purchased a box of chai latte and a box of hot chocolate, so I'm good to go. 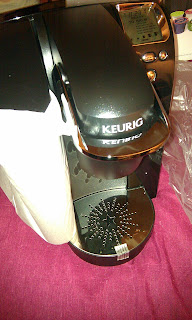 The little tiny pieces of styrofoam that came out of the box with it weren't fun, but those were few in number and easy enough to clean up. 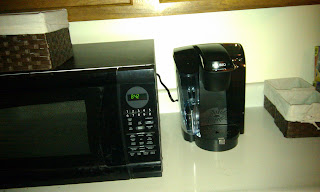 The Keurig in its new home. I had it all the way against the wall here. Later I pulled it out some. It's not too tall to fit under the cabinet, even when opened. I also later switched the baskets. Two little ones are now on top of the microwave, one for tea and the other with hot chocolate. The later basket is on the far right with packages of microwave popcorn. 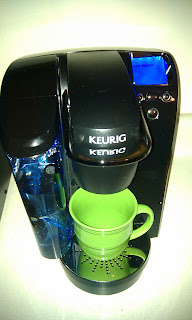 Getting ready to use my Keurig! Rinsed it out then ran some hot water through it first.

Yes, I actually read and followed the directions!

I set the default cup size to 9.25 oz, large mug. I can easily change it to one step larger, travel mug, as needed. I also set the temperature to the lowest setting, 187*F, since I'm not one that likes hot beverages to leave blisters. 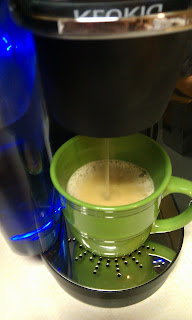 So far so good! I have the clock set now with it programmed to turn on at 6:00 am and off at 8:00 am, ready to make me a yummy hot beverage before school. I don't want it keeping water hot all day, so I'll manually turn it on and off at other times of the day if needed.

I love the color. It's a basic black like my other appliances, though I do have to say if it came in green I would have gone with that. (My choices were silver, black, or red.)

For some reason I thought I could set it to automatically brew at a set time, but I haven't found that in the instructions. I must have misread that or just not found it. With how fast it brews though, that won't be an issue. When it's on, there is hot water ready to go. It only takes a minute to brew, so an auto brew feature for me might just cause cold tea. I think tomorrow morning I'll wake up, put a drink choice in, hit brew, let the dog out, then come back for my drink. I plan to have a mug ready at all times.

Overall I think this was a nice little splurge on myself. I've worked hard and felt I deserved a little something. With the deal a friend helped me find, I feel it was pampering without going too overboard. For my DOC and carb-conscious friends, the chai latte I got has 10 carbs and the hot chocolate has 11 carbs. I can probably find lower carb counts if I want a few cookies with the beverage, but it's also low enough when I'm not going to worry about a cup here and there.
Posted by Sue Rericha at 9:51 PM